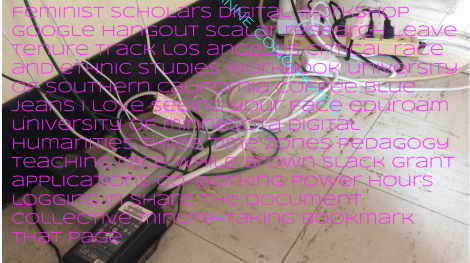 This is a story about how to find your people.

We are SCRAM, the Situated Critical Race and Media group. This is my part of the story.

During a tenure-track research leave in 2015, I applied to participate in the Feminist Scholars Digital Workshop, hosted by HASTAC. I was working on a grant proposal for my university’s interdisciplinary research center, and wanted some feedback. I’d already been waitlisted for the award once, and wanted to win it the second time around. The award would have allowed me to be at home in Minneapolis full-time, and that was really important to me, then and now.

FSDW’s format included a peer review group, and it’s there that I met Anne Cong-Huyen through the screen. She read my proposal, gave me great feedback, and invited me to FemTechNet’s conference in Los Angeles that same summer. Academically, I was really, really lonely. Anne’s warm invitation was just what I needed.

Because I’d lived in LA before moving to Minneapolis, I was more than happy to return, and I met Anne and others who were working on a Scalar project called the FemTechNet Critical Race and Ethnic Studies Pedagogy Workbook. I joined the project and never looked back, meeting other members of SCRAM in the process.

The following spring, FemTechNet hosted a conference in Ann Arbor called Signal/Noise, and I made the image attached to this post during one of the conference’s maker sessions with Veronica Paredes and Hong-An Wu. I also saw Kristy H.A. Kang present her inspirational “Seoul of LA” project, and had already started thinking about ways to hang out with these amazing people on a regular basis, not just in our screens.

Our CRES (Critical Race and Ethnic Studies) group was now meeting bi-weekly and documenting as many of our thoughts, plans, and processes as possible. We knew we wanted to spend time building together, so the first years of our current configuration were heavily invested in grant-writing and supporting each other along our career and personal journeys. We were meeting up at conferences when we could, sharing the resources that we had, and asking ourselves a lot of questions about what it means to be who we are in academia, while we were busy being who we are in academia.

We were learning by listening to each other, breaking stuff, and watching our peers, fans, and scholarly elders. Alex Agloro coined the term “Hang-based Pedagogy” and we ran with it. In practice, this term has meant that we’ve worked with FemTechNet colleagues to organize a network gathering every year at the Allied Media Conference, where we tell versions of our multiverse origin story at the same time that we’re living it; that we’ve made an art out of screen capping chat sessions, where the most important points are in the gaps between posts; that we’ve hacked funding mechanisms so we can maximize our gifts to each other and our workplaces, where we return, refreshed, after time spent researching together.

My part of this story is certainly about locating people, but also about contextualizing how and why and when you find them. It matters.

*RIP Chris Cornell. Ups to all the CA/MN BIPOC Gen-Xers who know the song by heart.